Brett Weiss ’15 has always been interested in emergency medicine.

“Preparation is key,” said Brett, who after seeing the news about the school shooting at Marjory Stoneman Douglas High School in February 2017, knew there was something he could do. “I worked night shifts at a Level 1 Trauma Center in Miami, and that’s where I learned about Stop the Bleed.”

Stop the Bleed is an initiative jointly created by the American College of Surgeons and the White House, which encourages people to become trained, equipped, and empowered to help in a bleeding emergency. Participants learn what to do when someone suffers a traumatic injury, including how to use a tourniquet and pack a wound to physically stop bleeding until first responders arrive.

“In emergency situations, many deaths occur because people bleed out, which is preventable,” said Brett. “I read a study about 1,000 patients who had been admitted to Level 1 Trauma Centers for vascular injuries in the Journal of the American College of Surgeons. Those who were not treated with a tourniquet had six times greater odds of death.” “Stop the Bleed was being taught to law enforcement and teachers, but I felt there was a missed opportunity by not teaching it to students.”

“I started by calling the Stop the Bleed organization and told them I wanted to bring the training to my school campus,” said Brett. “The first thing I needed to do was find instructors, and, having interned at the University hospital in the past, I told one of the trauma surgeons about my idea. He and his team offered to do the instruction for me right there.”

Brett then had to secure licensing and approved marketing materials from Stop the Bleed.

“It took a great deal of work,” said Brett. “Preparing was the biggest part of the event. I had to make sure I was offering the course correctly. I learned a lot about how to implement a program. I had to have goals and a budget. The University hospital helped me finance some of it, but I paid for some out of my pocket as well.”

Leading up to the event, Brett received an email from the United States Army Healthcare Recruitment team. They wanted to attend the event to recruit students, but Brett asked them to help sponsor the event, which they were happy to do.

“The Recruitment team brought food, water, and materials,” said Brett. “Unbeknownst to me, and without having asked, they helped the nurses and physicians train people at the event. It was great to have their expertise and for them to share the experience between civilian and combat trauma.”

The event went off successfully, with those demonstrating proficiency earning certificates of the training.

Brett remains passionate about bringing Stop the Bleed to as many people as he can.

“I think it's an important skill for anyone to know,” said Brett. “My idea was for students to be trained, but anyone can learn it. I will continue to advocate for the program on campus from afar and am thrilled that I was able to deploy 80 bleeding-control kits through the University’s police department.”

“Wherever I go, I will be willing to teach Stop the Bleed,” said Brett. “It is as essential as CPR.” 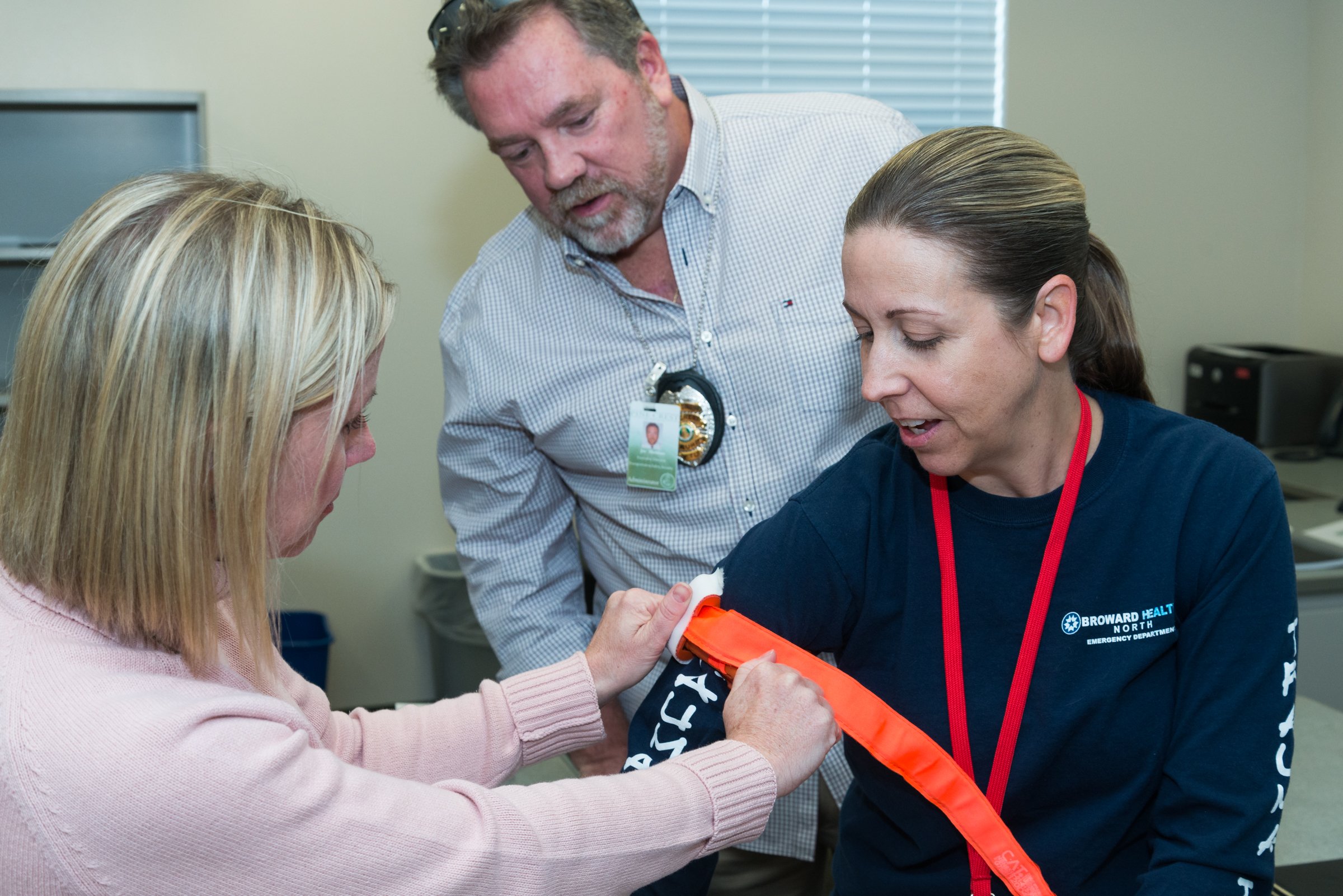 Since spring 2019, Pine Crest School’s safety, security, and health office teams have offered Stop the Bleed training to all faculty and staff. Stop the Bleed kits are located in strategic locations throughout the Boca Raton and Fort Lauderdale campuses.