Mrs. Janice Reich: A Teaching Career in Service and Gratitude

Mrs. Janice Reich may not have taken a traditional path into teaching third grade on Pine Crest’s Boca Raton campus, but it is one that is unique and marked by true dedication and service. Born, raised, and educated in Philadelphia, Pennsylvania, Mrs. Reich attended Temple University where she majored in accounting as an undergraduate.

Mrs. Reich continued her education locally, where she received a law degree from the University of Pennsylvania. From there, she pursued her certified public accountant (C.P.A.) designation and became an associate tax counsel at GlaxoSmithKline. Soon, her husband’s occupation necessitated a move to the New York City area, and they lived in Short Hills, New Jersey. Eventually, Mrs. Reich became a mother to two wonderful Pine Crest alumnae, Jessica ’04 and Deborah ’07. 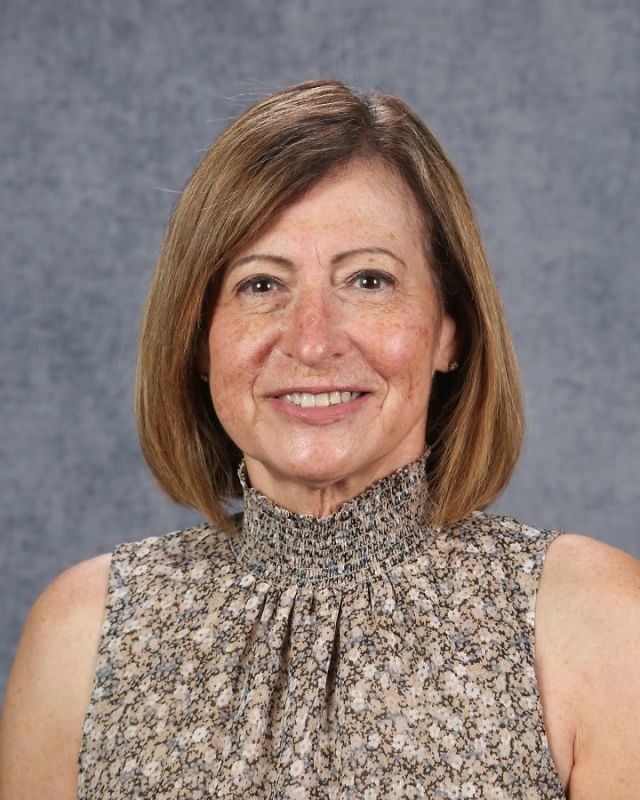 Ten years into life in New Jersey, Mrs. Reich’s husband was offered a position in South Florida. After they made the move, the family received numerous recommendations for school and enrolled the girls at Pine Crest School’s Boca Raton campus. She quickly jumped into volunteer work there. She goes on to explain further. “I wasn’t working because of our family dynamic. I didn’t know how else to utilize my time other than to give it away. I volunteered when the kids were small in New Jersey, so I continued in Florida. I spent the next five years involved in the Parents’ Association, and gladly served as head of the Publishing Department as well as a parent liaison to several parent/teacher committees.”

Because Mrs. Reich was already spending so much time volunteering at Pine Crest, she approached the Lower School Head about a job. She was placed as a Teacher’s Aide in the Rubenstein/Silvers Media Center, where she would remain for five years.

Shortly thereafter, the Teacher II (T2) program began. Mrs. Reich says, “I quickly enrolled and pursued a Master’s Degree in Education to become a certified teacher.” Upon completing the program, she would be part of the original group of T2s to be implemented at Pine Crest.

Mrs. Reich explains that while switching from corporate finance to teaching may seem like an extreme change, the transition happened organically for her. “When I was working with the Parents’ Association, I worked very closely with teachers. I became enamored with what they did. Having helped so many other children and then having been a mother and teacher of sorts to my own children, it felt like a natural fit. I love children. Teaching felt good to me. I had no desire to go back and be a tax attorney!”

In the time since completing her Master’s degree and assuming the T2 position, Mrs. Reich has served in several roles here at Pine Crest. “For the last 15 years, I have been so fortunate to work as a T2 in the first through fifth grades, with a brief stint teaching Geometry Honors in Middle School. I also spent five years as a lead teacher in the role of Math Enrichment Specialist, which allowed me to work with several grade levels and oversee the Lower School math competitions.”

After taking time to reflect on her 20-year career here, Mrs. Reich describes some of the things that will remain with her as she moves on.

“My favorite parts about teaching at Pine Crest and what has kept me here are my students’ enthusiasm to learn, my colleagues’ encouragement and guidance, and our parents' support and respect,” said Mrs. Reich. “I feel fortunate that over the last 20 years, Pine Crest School has stayed the same; it is truly my second family.  Pine Crest is not only the place where I work but a place that has always challenged me to be the best person I can be—each and every day molding me into someone eternally striving for the highest standards in myself.”

Mrs. Reich continues by describing more of her fondest memories. “My proudest moment as an educator was when a former student who was in Middle School, approached me to say the most important thing he learned was when he was in my fourth grade math class. I always said to my students to never try to be the first person to turn in your assignment/assessment. Do not rush and check your work. Take pride in everything you do. This will ensure that you are trying your best and allow you to show the teacher what you know.”

It goes without saying that Mrs. Reich’s students have left an impression on her over the years. But she also acknowledges the powerful influence her colleagues have had on her. When asked who might have inspired her the most, she replies, “There are so many! I’ve learned so much from those that were here in years past, and those that I work with currently. Everyone here has taught me something. I could go through my entire career here and give you a long list of names, but If I left anybody out I’d feel bad.”

Though Mrs. Reich prefers not to single any one person out, she does share the most impactful thing she’s taken away from her colleagues.

“The greatest lesson I’ve learned from all of them is how to approach children, remembering that they all have different learning styles and different emotional makeups,” she said. “They’re not robots. In teaching, our job is to make it fit and make it feel comfortable for everybody. The children spend most of their day here, so let's make it enjoyable. It shouldn’t be that kids don’t want to go to school; it should be that they can’t wait to go everyday.”

Though she may be gearing up for retirement, she has a plan for what lies ahead of her. “I am someone who must have something to do. First on my agenda will be re-organizing and cleaning my house. I thrive on things being orderly. I’ve collected quite a bit over the years, and it’s time to clear some space!” 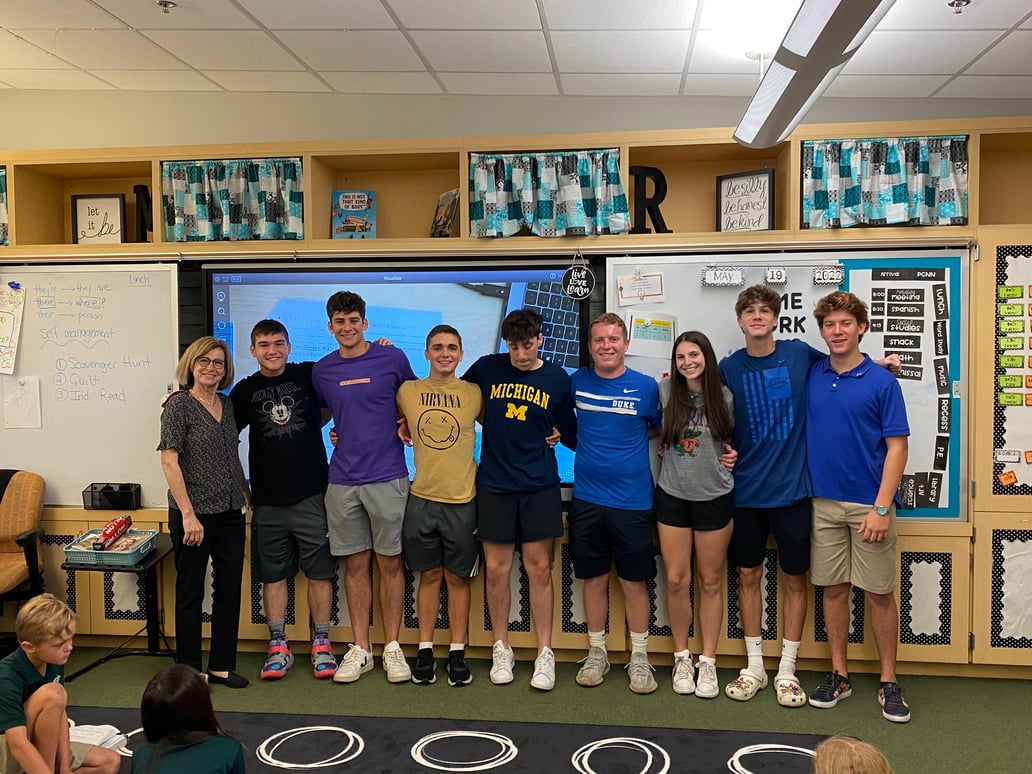 Former first grade students from the Class of 2022 visited Mrs. Reich on their last day of school.

Once she’s taken care of home, Mrs. Reich is eager to get back into the very thing that opened the door for her at Pine Crest: volunteering.

“I’ve looked into the Milagro Center, a non-profit organization in Delray Beach that would give me the opportunity to once again work with children, read to them, and be a mentor,” she said.

Mrs. Reich could see herself possibly re-exploring her legal background as well. “I am interested in the Innocence Project,” she says. “There, attorneys do pro bono work with prisoners that have been jailed for a long time, who may be innocent, but haven’t had the means to pursue their cases any further.”

She would also like to explore work for the Shoah Foundation, an organization that holds very personal meaning to Mrs. Reich, whose father is a Holocaust survivor. An Institute founded by Steven Spielberg in 1994, the original goal of Shoah was to videotape and preserve interviews of survivors and witnesses of the Holocaust. The work has evolved, and the current Mission of the company is to develop empathy, understanding and respect through testimony.

“This probably sounds like a lot,” Mrs. Reich says, “but I just want to put my feet in the water and see what works.” Despite leaving teaching, she feels that it could remain a part of her life. “I may substitute. My tendency is to say yes to it, but I do want time to step away and reflect. I want to have the time to spend with my family. My daughter will soon be having a child of her own, and I want to be there for her.” When asked if she has any plans to relocate, she says, “I would absolutely consider moving again, closer to my daughters in New York. But my husband probably would not. Right now his job would not allow for that change, and he loves it here.”

If Mrs. Reich could leave parting words with those who remain at Pine Crest, she would like to say, “To new faculty and those who will come after me, my strongest advice is to listen. Listen to your students who have much to teach you and listen to your colleagues who will always be there to guide you.”

“Truthfully, that’s the most important thing for anybody. The best learning happens when we just listen and hear each other. Take the cues from your students and colleagues. Make it your own recipe but always be learning and absorbing. Always be a student yourself first.”