Pine Crest School Executive Director of Security and Support Services Joseph Markham has been named Campus Safety Director of the Year by Campus Safety magazine. Awardees were selected from a pool of national candidates representing pre-kindergarten through grade twelve schools, colleges and universities, and hospitals. 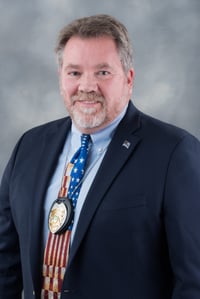 Mr. Markham was on hand to receive the award and express his gratitude at the Campus Safety Conference. Click here to read the Conference story.
Safety and security are top priorities at Pine Crest. Over the past 18 years, Mr. Markham and his team of security professionals have helped build a culture of safety and security at the School, where everyone in the community plays a role.

Pine Crest Security has implemented high-level situational awareness training for faculty and staff, added state-of-the-art monitoring and communications equipment, increased staffing, and enhanced protocols for crisis preparedness and response.
From visitors checking in with security when arriving to campus, to wearing an identification badge at all times while on campus, to parents, faculty, and staff adhering to drop-off and pick-up protocols, Pine Crest’s program has become the benchmark for independent and public schools.
Campus Safety magazine recognized Mr. Markham for these achievements and more, specifically highlighting communications and the School’s hazardous weather preparedness and response during Hurricane Irma in 2017.