Student Entrepreneurs Make Their Name in The Community

Upper School Students Rhea Jain ’20 and Neil Sachdeva ’21 were selected to join the Young Entrepreneurs Academy (YEA!) in the fall of 2018.

YEA! is a program that supports aspiring entrepreneurs in middle and high school. The program runs for nine months and connects students with local industry leaders, community members, and educators to develop their interests. At the end of the program, students pitch their ideas to a panel of investors. The first place winner receives seed money for their company.

This year, Rhea and Neil won first and second place, respectively, in the “Shark Tank” event at the end of the program.

“My mom actually found the Academy online,” said Rhea. “She encouraged me to get involved with them to grow my business, which I was just getting off the ground.”

Rhea started Rénoosh — a high-end, petite clothing line in 2017 — as a freshman.

“I struggled to find clothes that fit me,” said Rhea. “I am only 5’1”! I have a large social media following, and people would reach out to me asking where I find my clothes. So I decided to create my own. I created nine pieces that are interchangeable — you can make more than 25 looks with the pieces.”

As the first place winner, Rhea traveled to Rochester, New York to compete against the YEA! winners from around the country at Rochester Institute of Technology.  Contestants compete to win scholarship money and other prizes. Rhea was a top ten finalist, finishing in sixth place. 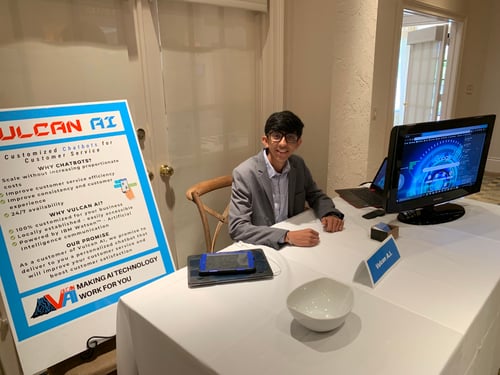 “They are placed on my clients’ websites,” said Neil. “Customers who are looking for quick answers can simply ask the bot, which is available 24 hours a day, seven days a week. Chatbots improve customer service and customer experience for businesses.”

Neil got the idea to launch his business after working with an AI firm in the summer before entering his sophomore year.

“I was working with chatbots and conducting research there on where and how the bots are used,” said Neil. “They are great tools but they aren’t widely used, yet! I thought that I could help get the word out.”

Neil won second place in the competition and has garnered attention from local business leaders who have offered to buy his service and invest in his company.

Neil isn’t the only entrepreneur in his family. His younger sister Annika Sachdeva ’25 is also involved with the YEA! and has been working to launch her business, SunStreaks.

As a long-distance runner, she found carrying a bottle of sunblock to be inconvenient. SunStreaks are individually packaged sunscreen wipes for athletes on the go. Annika won first place at YEA!’s Elevator Pitch Competition in which she had 60 seconds to pitch her business to local entrepreneurs.