A big part of being a student in the Pine Crest Upper School is the opportunity to discover what you love to do. Students are able to expand on their hobbies and interests not just by joining extracurricular activities in the arts or athletics, but through leadership positions in student clubs.

Of the many clubs on campus, DECA has become one of the largest and was founded by seniors Ethan Berman ’19 and Harris Gevinson ’19 when they were freshmen.

DECA is a national organization, whose mission is to prepare emerging leaders and entrepreneurs for careers in marketing, finance, hospitality, and management. They host competitions throughout the country for various high school chapters to compete.

“Harris and I started DECA at the end of freshman year, and it officially was a club at Pine Crest starting in my sophomore year,” said Ethan. “The process for starting the club was challenging. We had to contact the state and national DECA organization and register with them to officially become a DECA chapter.” 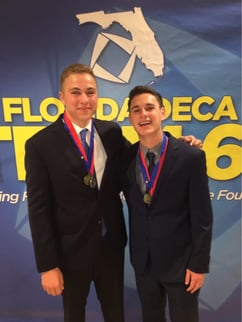 Within the short time of its existence, the Pine Crest DECA team has experienced an overwhelming amount of success with more than 20 individual state qualifiers and four national qualifiers last year. 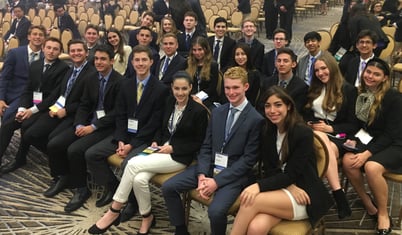 The success of DECA did not solely come from just Ethan and Harris, but with the help of their club sponsor, Mrs. Julie Venne. When Ethan and Harris were in the process of creating the club, they went to Mrs. Venne, Upper School Mathematics Instructor.

“My position deals with logistics, whether it be by making sure rooms are reserved for meetings or organizing trips for the competitions,” Mrs. Venne said.

“When Ethan and Harris approached me with this idea, I did not know what it was or how I was supposed to facilitate them when executing it,” said Mrs. Venne. “They reassured me and said ‘don’t worry, we will take care of everything.’ Ever since the club has existed, the two have always been incredibly diligent and organized, whether it be by creating powerpoints for every meeting or sending research packets to help students prepare.”

Ethan and Harris have worked incredibly hard to keep the club running smoothly.

“Leading DECA has certainly been one of my favorite experiences at Pine Crest,” said Harris. “It is so amazing to see more than 150 students from every grade actively participating and engaging in DECA meetings, activities, and competitions.”

“I could tell that students wanted to be able to engage in an activity that supported their future business related career interests,” said Harris. “I was not expecting for the club to become as popular and impactful as it has.”